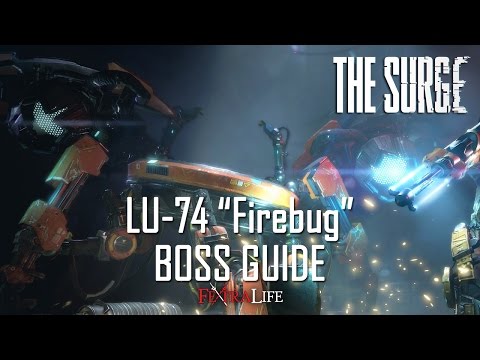 The LU-74 "Firebug" is not an overly difficult fight and has 2 phases. During the first he really only has 2 attacks, a short whirlwind and a thrust with one leg. Simply avoid him when he whirls and run and slide and hit him, dodge his leg thrust and repeat until phase 2. In phase 2 he will do a flame attack right in front of him, he will charge you and he will do a long whirlwind attack. You want to again avoid the whirlwind and also the flame attack, dodge his charge and again slide an hit him. Dodge quickly to avoid him collapsing on you.

Note if you sever all its legs you can get Firebug Throttle V2.0.

Sever all legs before you kill LU-74 Firebug will give you Firebug Throttle V2.0.