Bloodhounds are enemies in The Surge. 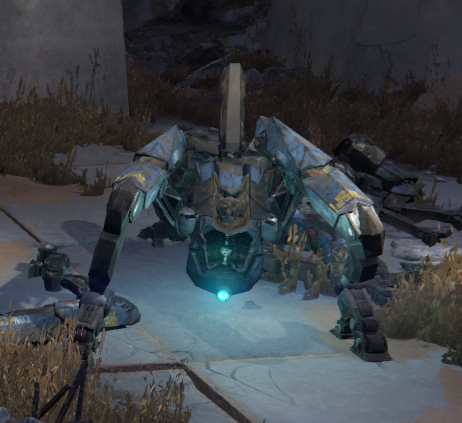 They are large, quadrupedal security robots, first encountered patrolling the outside and inside areas of Resolve Biolabs, or within the somewhat hidden and entirely optional Discarded Safety Equipment area of Central Production B, where six non-respawning ones lay dormant on the way to a valuable implant. Bloodhounds are often found in a dormant state, but they will invariably rise up and attack Warren as soon as he approaches.

Bloodhounds are fast, aggressive combatants, with medium durability. They have three targettable limbs, their two front legs and their tail, which can be severed to prevent them from using some of their attacks. However, as the remaining attacks are arguably more of a threat, this may not be always recommended. Destroying one of the legs will prevent the kickflip and leaping attacks.

The Bloodhounds use the following attacks:

Try to avoid fighting multiple Bloodhounds, as their leaps will make it very difficult to attack one without being hit or dying to another.

Severing the Bloodhound's tail will always produce a Ancilliary Core implant, which can be used or destroyed for a guaranteed 1,000 Tech Scrap. Farming these implants is possible but, given the threat posed by a Bloodhound, not recommended unless you're very comfortable farming them.

Bloodhounds tend to telegraph their attacks with a "honk" noise - there's a lot of warning when they're at range, but when you're in melee range of them they will forego the noise sometimes.  Using the honk and their preference for the ranged leap attack, it's possible to fight them even at a low power level if you're conservative in your attacks and are either very good at timing blocks, or have enough room to dodge comfortably while fighting them.

The simplest way to fight them is to use a medium-speed weapon (a one-handed or staff weapon), and pre-target their tail before starting combat.  Once you've engaged them, back up so that the Bloodhound will use it's "honk and leap" attack, wait for the honk, then wait for the leap, and then dodge sideways immediately after the leap starts - the Bloodhound will land where you used to be before the dodge, and then you can slide-attack the tail and then dodge back out after you've gotten in a hit or two.  Dodge or run backwards away from the Bloodhound to get some range, and it will set itself up for another "honk and leap", and then you just dodge out and slide back in for an attack on the tail.  Keep doing this until the tail breaks off, switch your target to a leg, and keep doing the same dodge and attack pattern until you've killed the Bloodhound.  You likely won't do a lot of damage per attack, but once you get the pattern of dodging and attacking down you can avoid taking significant damage while whittling down the Bloodhound's large health pool.

If you want to kill a Bloodhound faster, don't target it's tail - either target a leg or don't pick any specific bodypart at all - you won't get the Ancillary Core implant from breaking the tail off, but you also won't risk extra damage by taking the time to break it off.